We awoke with a text from Jessica R, and eventually set off to meet her at noon by the lagoon for lunch. But en route we discovered something surprising. In avoiding the appalling high levels of ultraviolet and it’s attendant risk of skin damage that are a given down under on most days, we popped into an open door and the cool of a mall. And in the mall, came upon Elizabeth Barden, the most fantastic (and educational) salesman in the greatest clothing shop the Venetia has yet found. So many and splendid were the clothing options that we headed out for lunch without buying a thing, but promising to return.

We had a great lunch with Jessica – discussing everything from travels to politics to the C of E and Eddie (Executive-Transvestite-And-Serial-Marathoner-Deserves-A-Knighthood) Izzard.A little later we were to encounter one of Izzard’s routines in real life: 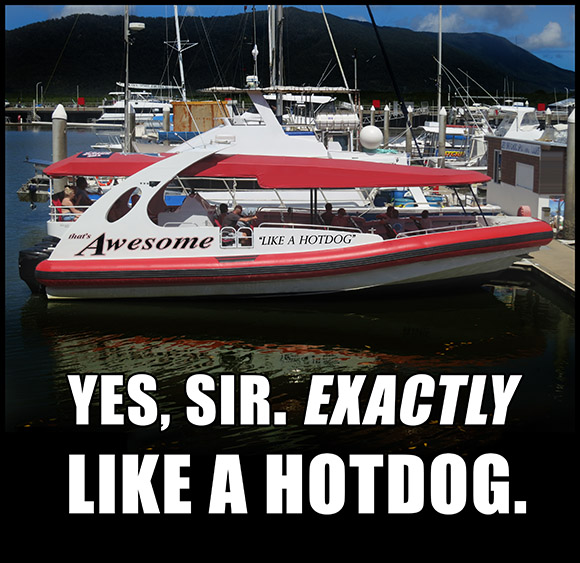 We were delighted that she could use the balance of the phone SIM card we’d bought in Melbourne only a week earlier, but were a little sad not to be able to phone her amid the festivities later because she had “my” phone. We hope to visit with her again when we head to England later this year. 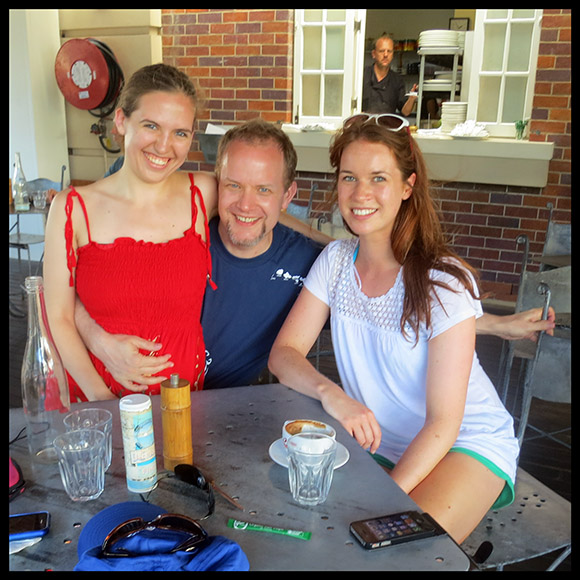 The return to shopping was… Epic. And curiously time consuming. Apparently when one is a petite (or “VS”, or “very small”) person of a certain shape, finding properly fitted clothing can be very difficult. Who knew? But once that mother lode was struck, there was really no turning away. I suspect she will be all too happy to show off the new togs upon our return. And really, it’s all good reference…. 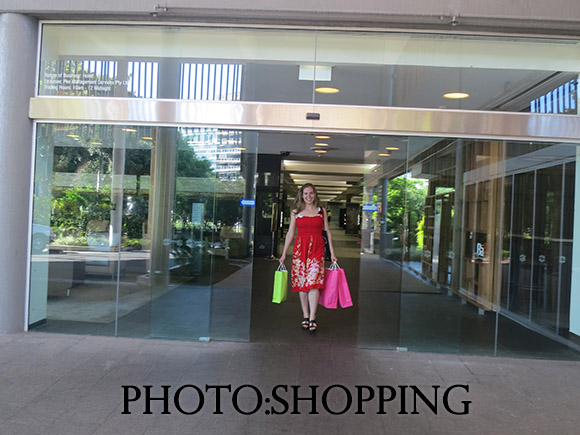 After the well-earned (or would “well-spent” be more apt?) nap that followed, and as the final flying foxes races across the sky, we ventured forth into the twilight in search of a meal. But instead of the otherwise quiet street with the cacophony of parrots where we’d tried competing Indian restaurants on the previous nights, we turned down the street that had once, back at the city’s founding, been Chinatown. 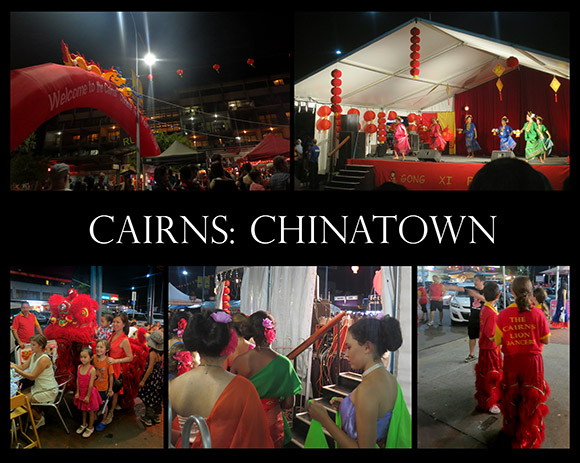 There, much to our surprise, we encountered an inflatable Dragon Arch and a street festival celebrating the Chinese New Year. We paused to watch a couple dance to an all lost familiar tune, dueling English and Chinese speaking announcers, and an Indonesian troop on the makeshift stage. But it wasn’t just the Festival of the Snake that was crowded – everything was. Apparently Saturday night in Cairns is a wild time every time! We lacked the requisite reservations for the exotic Ochre (“Sorry loves, can’t get you in until 9”), but after a trip through Fried Food Alley and the spectacle of The Night Market, we found a fine Thai place.

After dinner we headed to the lagoon and looked up at the Southern stars while people thronged about having picnics and wading in the Lagoon. We were looking out toward the reef when a sweet quiet child with a slight speech impediment mentioned fireworks. Intrigued we waited a bit, and watched the exodus from the lagoon when the lifeguards called time. And then, when the sudden rain appeared, we moved back toward our hotel. We’d just about left the promenade park when the first explosion went. We knew it was from Chinatown by the incredible flights of birds rushing away from the site, and so we headed back the way we’d come for a better view. I grew up with masses of DC fireworks (and hope to see them again this year), but the explosion of tropical birds was even more impressive. And the number of waves! Apparently many groups of birds slept calmly through the first barrages, only to come unglued later. After the fireworks, we headed back to the hotel to arrange our new wardrobes for a safe return to the US. 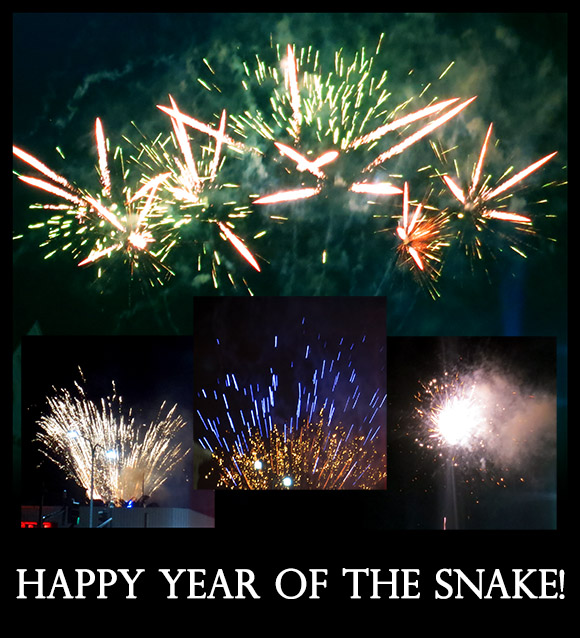 Day 23+: We Come From the Future, or “Once Around the World, James”

What a day. It all began in Cairns at 7am. But our letters of transit were incorrect, and we waited an extra 40 minutes for our coach accordingly. When it arrived, we hopped on and headed out into the brief morning rain. We had to experience a little rain after all – for otherwise how would we see a full rainbow? And what trip to Oz would be complete without one? 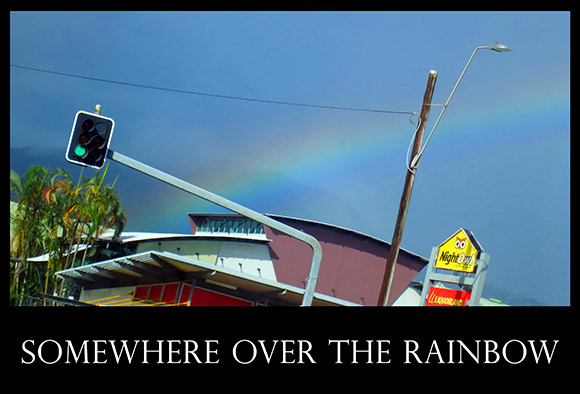 Weird to be visiting New Zealand again, but not stopping for more than an hour’s time.Nice to see the Dwarves guarding the International Arrivals Hall though. Those dragons are everywhere…

And wonderful to see areas we’d visited and knew from the ground ` and to be able to view the scenery as a topographical map with a scale of 1 to 1! 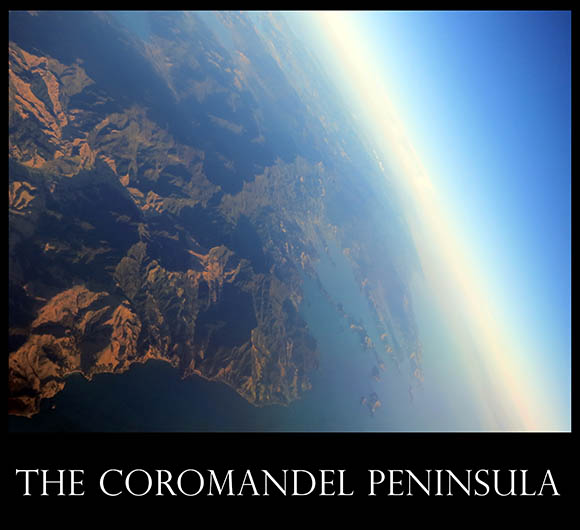 On the 12 hour trip to LAX, we saw an absolutely hallucinogenic sunset. Hard to imagine missing such a magnificent show by sitting on an aisle…. 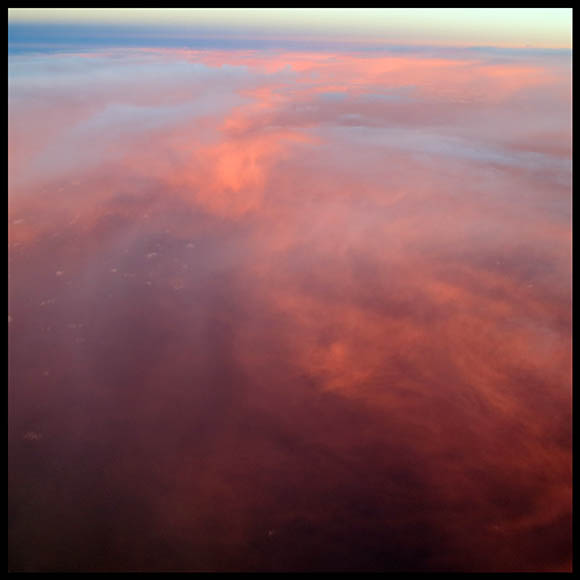 Air New Zealand is wonderful (so was JetStar). It’s almost enough to make me believe that the US is home to the worst national carriers in the civilized world. In addition to the Crowded House album (NZ represent!) i listened to as a dozed, I watched 4 films, from stately to the ridiculous to the more ridiculous: Lincoln, Seven Psychopaths, the Aardman Pirate movie, and Cars. All while Venetia revisited our trip through New Zealand by watching the entire Lord of the Rings trilogy (with the added Air N Zed safety film scenes, natch. Though we watched the same safety film thrice, the delight of passengers heretofore unexposed kept it fresh. Something no other such film has ever managed.). Airplane screens being what they are, we were always able to see more than our own screens. I took up Lincoln after the viewer in front of me turned it off when he realized that it was a largely procedural film about legislating. To see poor Boromir shot down during the successful House vote to end slavery was quite surreal. And weird cast and scenic interplay continued all trip long.

The captain woke the passengers for breakfast, ensuring that I’d have a view of the day’s second dawn. That was a first! 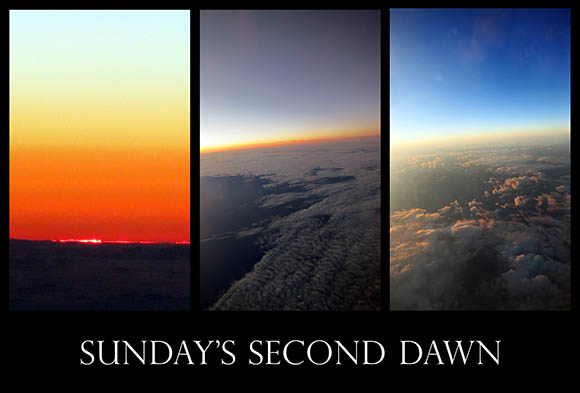 Santa Catalina was the tip off that La was near. How amazing that I’d been seated on the correct side of the plane for both New Zealand and Catalina. So much about this trip was lucky! 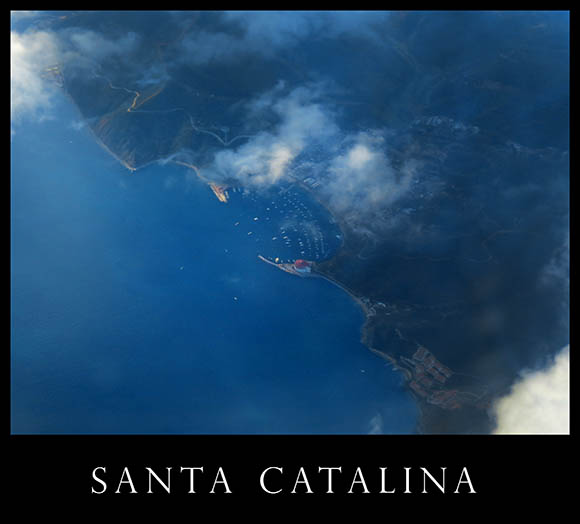 As I write this, we are trapped in the long layover at LAX – where the lines are not short. Where the airport is squalid. Where the prices and amenities are outrageous. And where the fascism of the optimally-intrusive and appallingly-surly security apparatus has me quietly humming an Orwellian take on Steve Goodman’s “(If Your Life Was On) Video Tape”. Fear – it’s the American Way. And like the now-sacred words “under God” added to our coinage during the Red Scare, this bureaucracy created during the Islamofascist Scare looks to be just as eternal and seems to be getting evermore entrenched. As do an absence of food or even snacks on flights, and all manner of asinine hidden fees. And unless one is lucky enough to travel abroad, such things will ever seem “normal”. 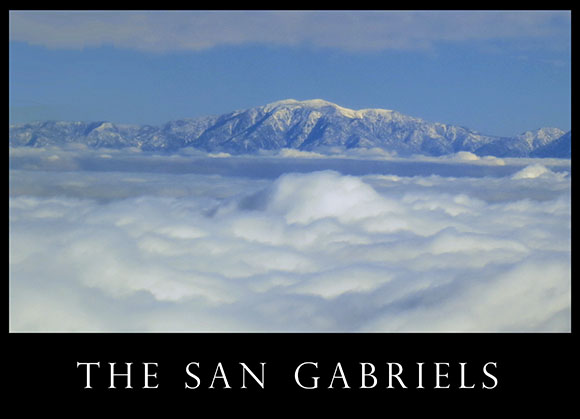 By the time we are home, it will have been 30 hours of travel.
And ALL on the same Sunday.

Addendum: We got to talking in the airport with Chicago’s Jack & Diane, and when they moved our gate, we barely had time to board. No food was taken. Happily, we met the wonderful Bruce Hostetler on the way home. Turns out we have scads of people and taste in common, and that he’d directed the version of The Hobbit I’d done the poster for (yes, it’s Hobbit all the way down). Bruce was returning from a Revels Board Meeting north of LA, and he was kind enough to pass over his banana in self defense. :)

Speaking of self-defense, there was a fellow in the Portland Airport openly brandishing a submachine gun while he was chewing gum. Clearly he’d come to kick ass and chew gum, but why? Just another ratcheting up of our country’s endearing paranoia….