We rose early enough to say goodbye to Stacy as she left for work, spent a leisurely hour packing up the car, and headed to the airport. Without the Security Kabuki we’ve grown so used to in America, the time from parking to waiting for our flight was something like 10 minutes. How very much like my memories of Grand Junction, Colorado’s wee airport when I was a lad – of how things used to be before the Fear Industry took over in the US. A couple hours’ flight south, we were excited to watch the acres of farmland give way to the “Southern Alps”.

Queenstown is a big mountain resort town – part Switzerland, part Montana, part Aspen. We ate lovely local ice cream in the airport and took a coach to our hotel with the lakeside view (just like most every building outside the very heart of town). A short walk to Thai food and a brief shopping expedition followed. We came back to long baths and more reading. Ah, vacation.

After cereal and yoghurt in our room, we headed to the Vudu Cafe to meet up with NZ photographer Trey Ratcliff, who had kindly helped publicize the charity calendar last year. A brilliant photographer and lovely person, Trey showed us a few splendid photos and kindly offered tips of things to see and places to go.

First among these places was the top of the nearby mountain. A large gondola takes people up, and then a small chair lift takes them further up to use the luge. This may be just a glorified go-cart track, but it’s got the best views imaginable. Top o’the world Ma, top o’ the world!

After my first 3 runs, Venetia and I headed in for lunch – only to encounter Trey and his lovely wife and kids! They were celebrating the kids’ last day of freedom before the onset of school and shared both their table and foodstuffs. Venetia and Trey exchanged book recommendations, and before we leave town we hope to pass along the copy of Mark Hodder’s ‘A Red Sun Also Rises’. Serendipitous indeed! 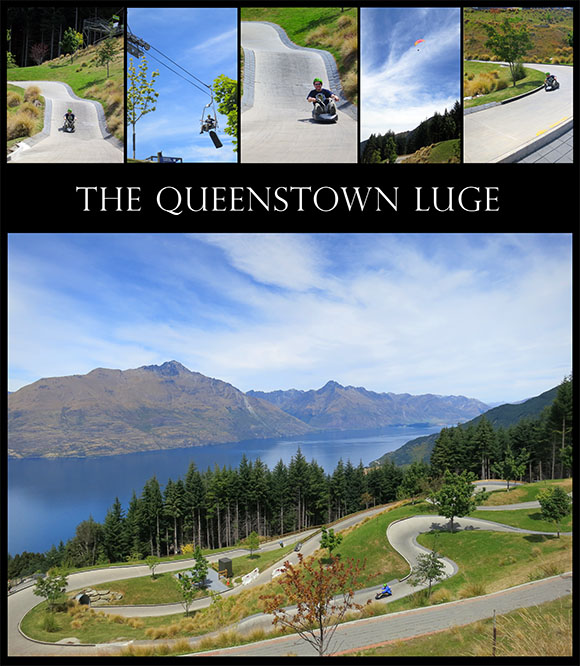 I took 5 more runs after lunch as tandem paragliders wafted overhead and Venetia took in the view. I could have ridden all day if the passes so allowed…. But ice cream and a walk around the garden awaited, before a trip to the jacuzzi and a proper appreciation of sunset. We’re certain this would be a fine town for star-gazing, but we find ourselves thoroughly unconscious by the time any stars would think to show themselves….
Day 12: Sometimes the treasured things are not the things that last….

We arose early to meet one other small drop of rain in the lobby. From there we joined a small rivulet in the tour bus. Eventually the bus picked up enough others to stream away from Queenstown on a 4 hour ride to the Milford Sound (a mislabeled fiord). In the Sound we joined with other streaming tourists and put out to sea – sailing into the Tasman Sea before turning back around.

To say that Venetia got carsick through the winding slopes and tilting hardscrabble tunnel en route would be an understatement, but then I suppose some things are better left understated. By happenstance Brownie, our driver, a Maori from Rotorua – a good communicator in English and Maori, and an excellent salesman – told a tale of native medicine that Venetia immediately put successfully to the test (though it seems to have turned her tongue bright orange). Here’s to native medicine!

En route we passed by the Mirror Lakes: 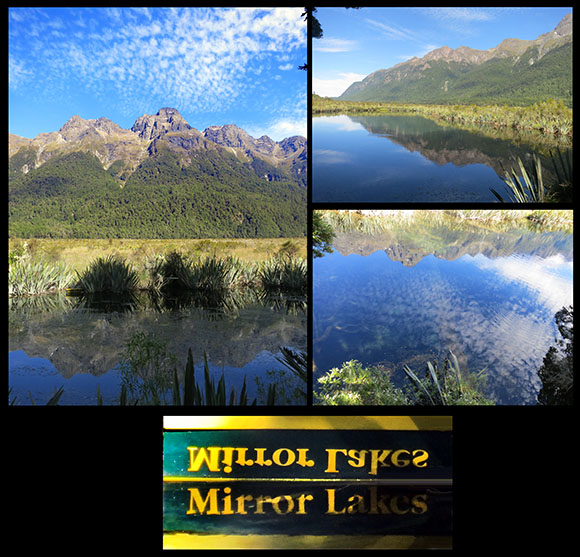 we climbed (and eventually descended) the Southern Alps.

The bus driver wanted to make sure his passengers signed on to hate a high-speed rail from Queenstown that the local Maori groups were lobbying for, but his reasoning was purely corporate – the rail in question would clearly be better for the environment. But it would make the long drive he was taking us on obsolete. And the tourist town stopping point (“Want a toilet? That’ll be a dollar, thank you,”) would suffer far more than bus passengers without that crucial dollar…. 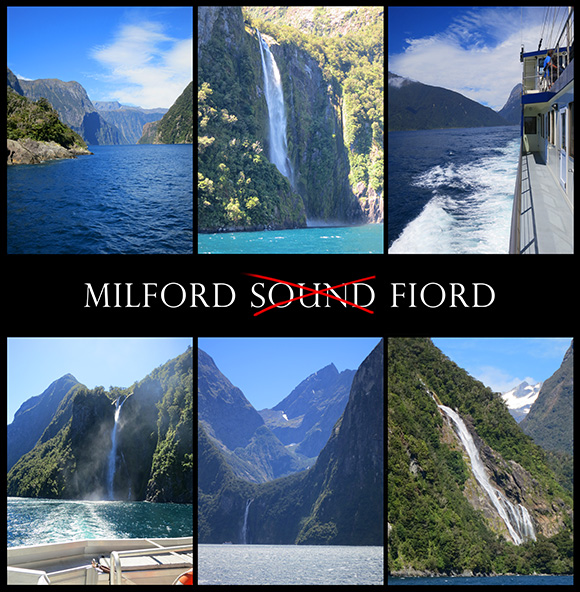 We both found the cruise astonishing – the animal life consisted only of a couple gulls, some suggestions of lobster by the intermittent traps, some very relaxed seals and a delightfully playful dolphin – but the sheer topography of the place!

We happily braved the 10k summer wind coming off the water, but at the end of the day, there was no way we could sensibly take 4 more hours of bus trip back. So we didn’t. Instead, we flew in a tiny plane over New Zealand’s breathtaking fiords. 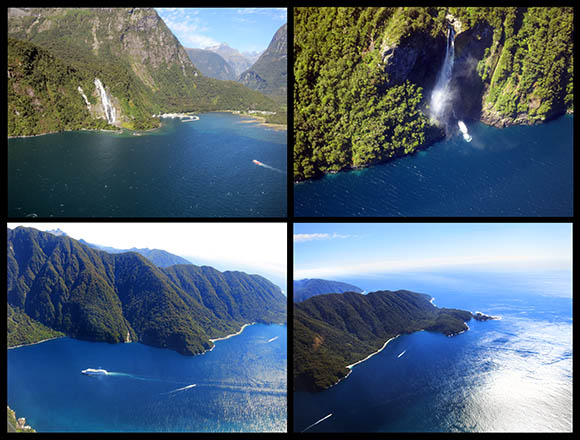 Our scenic 4 hour trip condensed, through a desire to stay outside our comfort zone and the miracle of cash, to a mere 40 minutes – barely reaching an altitude high enough to cross “the Wall” of the Darran and Humboldt Mountains (with their amazingly beautiful, but otherwise unattainable tarns) in time to come right back down. 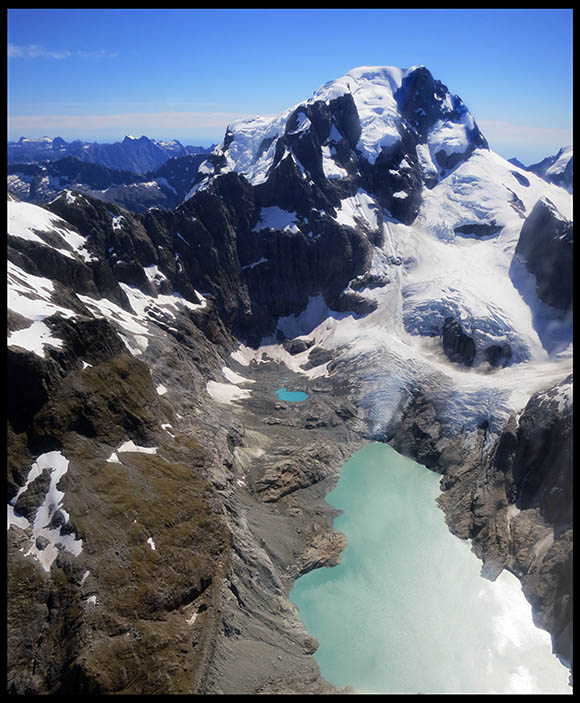 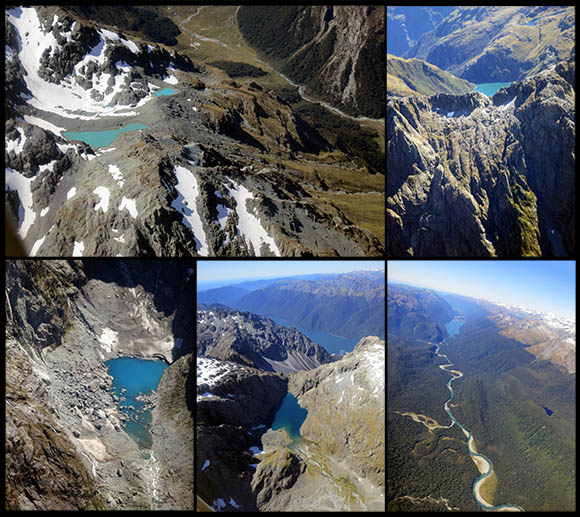 What an incredible day. Our hearts are still in our throats, and amid the bumps of the cruise and return flight I’m sure that many of our pictures are blurred messes, but today is our last in New Zealand and we went out with a bang!

1 thought on “Putting the Zed in NZ”